Leah's Yard will become a hive of activity with maker space; studios; quirky retail and cafes sitting around a characterful cobbled courtyard.

* Following the completion of Heart of the City II in 2024. 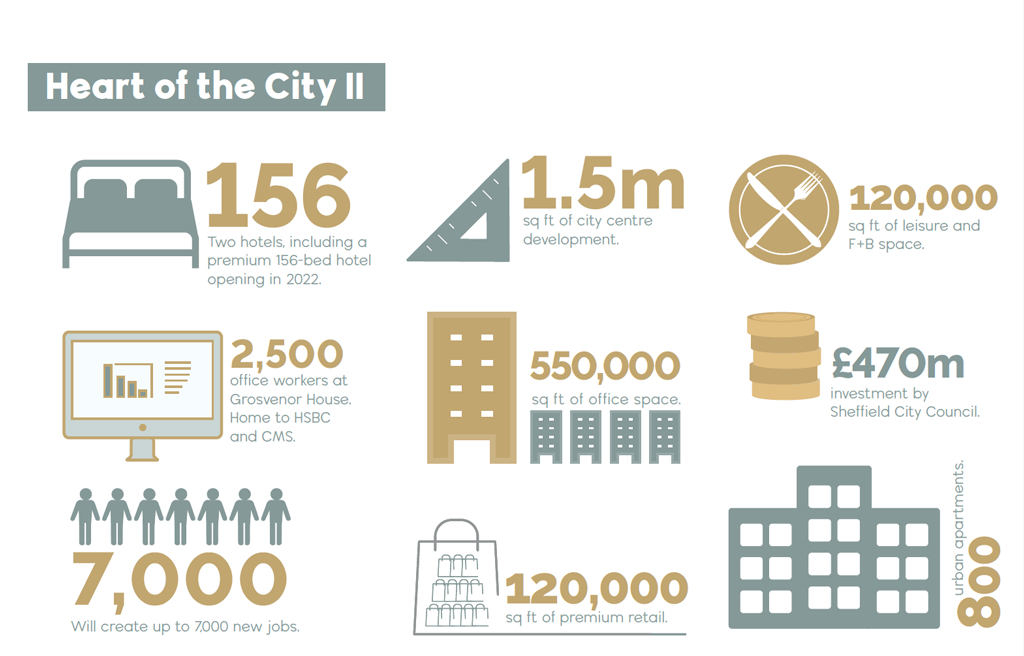 Programme set for completion in 2024.

Sheffield A city of ambition, energy and creativity

A regional capital at the centre of an ambitious Northern economy, Sheffield has become one of the boldest and most inspiring cities in the UK.

Home to 600,000 people, Sheffield’s demographic accurately reflects the makeup of the entire UK – making it the perfect location to launch new products, brands and experiences.

Supported by its two world class universities, the city is making a global impact in the digital engineering and design sectors, attracting one of the youngest and brightest workforces in the UK. It is home to 63,000 students – from home and abroad – who contribute significantly to the vibrancy of the city centre, where academia sits naturally alongside commerce and public life.

A highly skilled workforce is growing younger whilst increasing in both size and expertise. Sheffield attracts and retains the brightest and best, providing home to those seeking out opportunity, putting down roots and raising families.

Life is defined by its quality. Sheffield is the Outdoor City, attracting 17 million visitors a year thanks to some of the finest countryside in the UK, including the Peak District national park.

Heart of the City II

Heart of the City II is delivering Sheffield city centre its long-awaited commercial, leisure, retail and residential focal point. Building on the success of the original Heart of the City project, the 1.5million sq ft development will transform this area of the city centre into a dynamic mixed-use district that will help attract more jobs and investment, and ultimately, make Sheffield an even more rewarding place to live, work and study.

Rather than creating brand new streets from scratch, the scheme follows the site’s existing street patterns, helping to better integrate and complement other key districts such as The Moor, Fargate, Barkers’ Pool and the Devonshire

Quarter. It is also advantageously located equidistant between Sheffield Hallam University and University of Sheffield.

The scheme embraces the retention of the city’s heritage, including the preservation of the key frontages along Pinstone Street and Cambridge Street, plus the restoration of the historic Leah’s Yard.

Heart of the City II is expected to create around 500 construction jobs and the scheme should support between 5,500 and 7,000 jobs once completed. 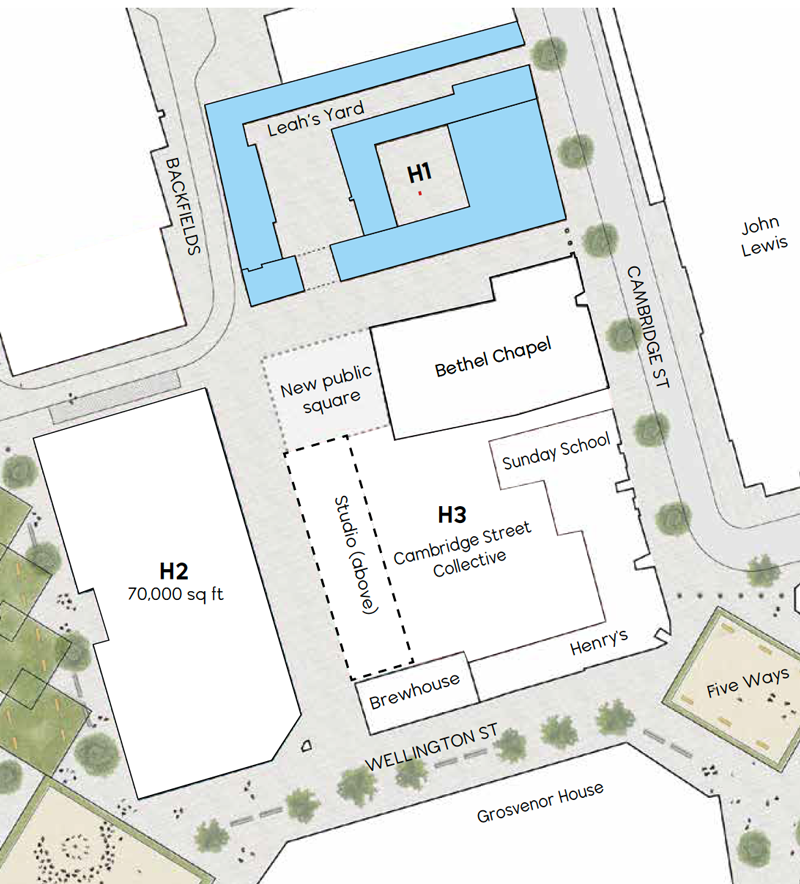 Located between Wellington Street, Carver Street and Cambridge Street, the Block H site features some of the most interesting historic buildings within the masterplan area, including Leah’s Yard, Bethel Chapel and Bethel Sunday School.

With its heritage and historic character, Block H will be the cultural and social anchor of Heart of the City II, with spaces to encourage human interaction, creativity and artistic expression – a true meeting place in the heart of our city.

Proposals include the retention of as much of the street-facing façades along Cambridge Street and Wellington Street as possible – helping to attractively balance the old and new across the site.

A large extent of Carver Street, Wellington Street, Cambridge Street and Backfields is proposed to be pedestrianised, creating an accessible and unique destination for people to gather, meet, work and shop.

Nestled behind the Cambridge Street frontage of the Bethel Chapel, the Bethel Sunday School and the identifiable corner building that was once occupied by Henry’s bar, Cambridge Street Collective (H3) is all about creating a destination for people to meet, socialise, eat, drink and be entertained.

A stunning, industrial-style space of circa 20,000 sq ft will be a social and communal destination in the heart of the city. It will also have a roof terrace visible from Pinstone Street and would incorporate the historic character of Bethel Sunday School on Cambridge Street and the former Brewhouse on Wellington Street. It will be a cultural hub where Sheffield's best sights, sounds and flavours all come together under one roof – attracting families, workers, students, residents, shoppers and tourists.

The external units on the Wellington Street and Cambridge Street frontages are envisaged as being occupied by separate restaurants, but retail uses may also be considered.

Part of H3, Bethel Chapel, fronting Cambridge Street, is proposed as a 15,000 sq ft venue for entertainment, music, comedy and other events.

A Grade II* Listed building dating back to the early 19th century, Leah’s Yard once housed up to eighteen ‘Little Mesters’ industrial workshops.

The collection of workshops has a fascinating history associated with the cutlery industry and featured handle makers, knife manufacturers and silver stampers. The key to the success of the buildings was that they could be adapted to provide a number of different metal industry trades, all on the single site.

The Council will commence structural repair and renewal work in 2020. The overall ambition is for this to once again become a hive of activity with Sheffieldinspired makers spaces; studios; quirky retail units and cafes – all sitting around a characterful cobbled courtyard.

There is a potential route through to the square, which links Backfields, Cambridge Street Collective and Bethel Chapel.

Phase one (shell and core) works on Leah’s Yard will commence in August 2020 and will take a year to complete. Phase one will comprise of structural and waterproofing works which will restore the shell of the existing Grade II* Listed Building.

Works include, but are not limited to

The drawings and sections above show new development behind the retained Cambridge Street facade. Retention of the two existing buildings, Chubby's and the Tap and Tankard, might be considered as an alternative.

We are appointed to identify expressions of interest for the building as a two stage process to identify an operator / tenant.

The Council are shortly due to be undertaking shell and core works including new roofs and floors, to put the building back into a decent state of repair.

The architect's are currently working up proposals which will demonstrate how the building, on its three floors, might be used operationally, including possible solutions for means of escape, compliance with the Disability Discrimination Act, vertical circulation, permeability etc. These feasibility plans will be available in a month or so and will be used for the second stage of the bids.

The architect's are also exploring options for the adjoining two properties, the former Chubby's and The Tap and Tankard. These will both be an integral part of the proposals for Leah's Yard.

At this first stage we are just seeking expressions of interest (which should include outline proposals) in order to identify potential tenants/operators with whom we might have subsequent discussions and develop a shortlist for the second stage which will invite final bids.

When formal offers are sought we would expect the terms to be a mixture of capital and rent. If the Council are required to undertake the second phase works then we would expect this to reflect in the final terms agreed.

The Offer Form at this stage will request outline information on the financial offer; proposals for use and initial proposals for fit out, including responsibility for funding of the works; track record of the bidder and confirmation of funding sources and availability. Parties are also able to submit further information and documents to support their bid. An Offer Form is available on request from the retained agents.

The outline information on the financial offer should indicate your proposed rent offer within a range for now and an indication of any capital available also as an indicative range. The Offer Forms will clarify these requirements further.

The proposals will be assessed both in terms of outline quality of proposals and financial offers along with statements on wider economic and social benefits.

All three elements of Block H (Cambridge Street Collective, Bethel Chapel and Leah's Yard)other than H2 (the office building) are being marketed at the same time and whilst the Council's preference is for separate offers (for CSC and Bethel Chapel), submissions for more than one part will be considered.

Expressions of interest should be submitted to the retained agents ' by 12 noon Friday 28th August.